Well a lot has gone on since I posted last. We’ve had the summer at home in the UK & Ireland, moved house again (I Know) and we now have a new edition to family expat! 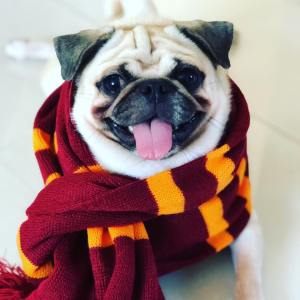 Yes, she is named after Luna Love-good from Harry potter, Yes I know she’s wearing the wrong house scarf, however she’s a now honorary  Griffyndor now and I think the colours suit her.

we only had her a few weeks and yet we are all totally smitten with her.

So we have adopted Luna from a charity here in the UAE called PARA we only had her a few weeks and yet we are all totally smitten with her. She is absolutely bananas she’s turned our lives completely upside down. She has the biggest tongue I’ve ever since and an attitude to match. Clearly visible when she barks her little toosh of at anything that moves when we’re out walking. Having a dog/puppy is just like having a third child. Trying to establish boundaries, to avoid crapping on the floor and she’ll only do as she’s told if you give her food!! She has a thing for socks, will shout at you when you’ve been out too long and looks at me like I’m insane when I let her out at night.  It’s actually very hard to believe that someone just dumped this cutie and left her to fend for herself in the burning Dubai sun. We were lucky that she didn’t have any serious injuries or skin conditions from being abandoned. Some dogs aren’t as lucky, there are so many wonderful people around Dubai and other emirates doing what they can for these poor animals that are just being discarded.  PARA regularly hold adoption days so if you are in a position to offer a foster or forever home please contact the lovely Sara or Fatima via their Facebook page.

I’m sure there will be several more stories about Luna as living with a dog will not make life boring, especially her doggy training with Dog Tags Dubai. I’ve never seen someone have such a hold over a dog just by holding a piece of duck doggy treats!!