Our second day we decided to use up one of  our attraction tickets and go to the SEA LIFE Sydney Aquarium. We got up late and Uber’d it down to beautiful Darling Harbour. 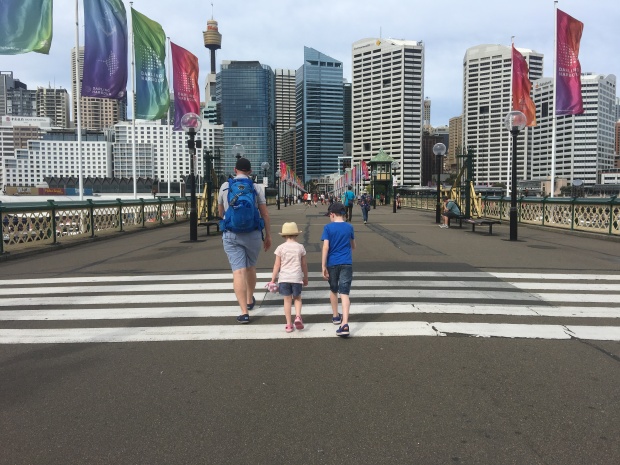 We walked along the water front stopped and had some food and then made our way to the Aquarium. The Aquarium was nice, not fantastic but then we do have pretty spectacular one here in Dubai so unfortunately we have been spoilt. However we very much enjoyed finding out all about Dugong’s and although we only got see the arse end of one it was interesting all the same.They had been rescued and put on a rehabilitation program, one had been released but was found again washed up on a beach/rocks and the other wasn’t ready. The penguin expedition was fun too, there is a little boat ride that last about 5-8 minutes and it takes you round the enclosure (they call it a colony, it’s not!)) of King & Gentoo penguins. It was freezing and the kids had a fab time. I know a lot of these places are above-board and they tend to rescue all their animals but sometimes the enclosures just don’t look big enough for the animals to flourish. Don’t get me wrong I know the Aquarium was doing all it can to help and constantly raise money for the animals. Anyhoo after the aquarium we made our way to the Allianz Stadium home of the Sydney Roosters  to watch them play against the Newcastle Knights. When we went to New York we took both children to see The New York Mets (Miss C was still in the Ergo) so we wanted to catch a local match here too.  We sat down got comfy and the heavens opened lashing rain!! The kids thought it was hilarious scrambling over the seats to get into the covered area.  We left after the first half as although we had enjoyed it, we thought the children had learned enough swear words and profanities for one day!! If you ask them both what their favourite parts of the day were Miss C: It raining at the match, LPV: the men shouting at the match……There you go folks, trip of a lifetime!  The swearing really didn’t bother me, you can’t keep your kids sheltered from it, plus they hear a few choice words from me on the school run, however they were being introduced to a WHOLE bunch of new ones that I didn’t care to explain. We had the same conversation as always “adult/bad words, repeat them and I’ll kill you etc and got a uber home!