I remember it so clearly, the way he smelled, the way he looked at me with just one eye open, the feeling in my heart when I held him like I didn’t think I could ever love anything as much as did him. It’s so hard to believe that it was 3 years ago, now he tell me off for tapping my feet to the theme tune of Thomas & get well soon, now I laugh at his little sayings and the way he copies everything I say “Two Minutes Mammy, two minutes”. Where did the past 3 years go, my baby is growing up so fast I feel like if I blink I’ll miss so much, it’s just amazing how much changes in that period of time, he’s still so innocent  but no longer so fragile that your afraid that you might break him. So nights I watch him sleep before I go to bed, he’s an angel…in Elmo pyjama’s. This gush of love & warmth just washes over me and I completely forget the fact he told me to go away more times that I care to remember that day or the battle at dinner time that would make General Custer quake in his boots. He’s a wee personality on two legs, he’s making friends of his own, know’s how he likes things and doesn’t and really isn’t afraid to tell me when I’m not pushing Percy right on the train track. I love that he’s just excepted he’s no longer king of the castle and tell his baby sister that she’s the best girl in the world, that’s she’s beautiful and she’s an angel.

Yesterday we had a party, a “Thomas party” to be precise, his little eyes were practically popping out of his head. The blood seat & tears, 12 hours of baking the day before and complete cake disaster were all so worth it to just see how unbelievably happy he was, he thanked everyone who handed him a present, unwrapped them with gusto “Wow wee that’s beautiful”. “Thank you for coming to my party” he would say as everyone left, ok the mother of the child he pushed over probably doesn’t care to remember him as fondly but one child is personal growth, believe me. The crappy european weather outside didn’t dampen spirit and everyone had fun, someone shone down on us as we had a couple of hours of  grey but dry weather so the children could run & play.

Tomorrow its Peuterspeezaal party day, I’ve stuffed more party bags, I’m taking in ice cream to fit in with their summer theme, I can’t wait to see him in his little domain celebrating with all his buddies. I’ll leave you with a few photo’s of our great Thomas party

Happy Birthday buddy, I love you 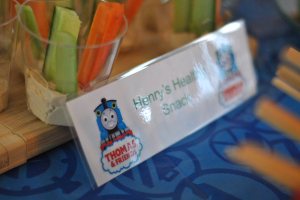 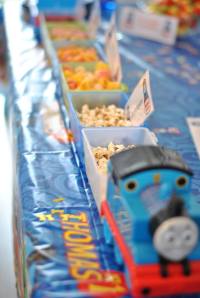 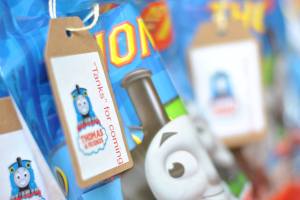 3 thoughts on “Another year”