My friday involved me Knuffling!! Me and a friend went to a Knuffle workshop, I said yes but quickly had to google it as I had no farking idea what it was. Google was useless and gave me the impression my mate had signed us up for a workshop of hugs!!! Yes a big group of strangers hugging each other for two hours . Thankfully it was not apparently a Knuffle is a Dutch soft/cuddly toy!!

Well you learn something new each day!! I’m so worldly & cultured I scare myself when I look in the mirror.

Anyhoo I went and I made a knuffle, now bearing in mind the only time I ever pick up a needle and thread is to fix the wire back into my bra, I actually had a really good time. I came I sewn I conquered the knuffle making!! I even used the sewing machine and educated the Dutch women who were there on the over use of the words “oh Crap”. Here’s the end product. 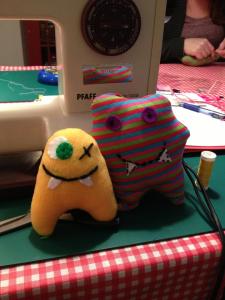 Now mine is the stripy demented looking starfish thing, it’s actually supposed to be a cat but I changed my mind and decided to go for monster!! EPD says it looks like something from cbeebies and when I showed LPV he said “wow Mammy, its Raa Raa“

It’s funny how things change, I guess it comes with getting more worldly & cultured!! This would have been my idea of hell on a friday night about 15 years ago but I had a great time and loved being out of the house. Lord only knows I needed it, I’ve been fairly down over these last few days, unfortunately for reason I can’t go into details about. All I can say is that I’m in mourning….not over the loss of someone close to me thank goodness but in mourning over something I so desperately wanted. I came so so close to having it, so close I could hear, smell it taste but now its gone and I’m so sad. I feel that the sadness is a wee bit exacerbated but the fact I keep forgetting my meds but still sad all the same. Hopefully it will pass, I’m praying it will.

Anyhoo I’m going to leave you with the scary image of  ahem.. Raa Raa the cbeebies Cat monster!! Oooh maybe that could be an idea for a new program…. anything better than Granny farking Murray

One thought on “Friday night”