Being an expat is all about exploring I think, or in the “Expatfamily’s” case getting lost. My neighbour & friends always recommend really cool places to us but we can never farking find them!! Take this weekend for instance a place called Onder de Platanen was recommended by our neighbour as we have been either travelling or  cleaning up after/ getting ready for visitors on our Saturday’s we decided to take LPV somewhere Fun!!

We loaded the car with a paraphernalia, got sort and then………………do have the address? No I thought you had it? I’ll get it off my iphone, this was a mistake of epic proportions. We drove for what seemed like hours, when “arrived at our destination” it was just some random dutch persons house, not an adventure playground with pancake house or farm!! The atmosphere in the car was becoming less family friendly and we were constantly getting told off by dutch bikers. It was the wrong day for me to have started my “I’m detoxing by drinking loads of water” phase. Bursting for a pee we managed to find the right address but then had to drive at least 40mins back. At this point LPV had got totally fed and gone to sleep and I was like a spitting cobra in pain as my bladder was about to burst. Anyone who has had a fetus use you bladder as a trampoline for 9 months will know how difficult it is to hold it in these days.

Any hoo we found it eventually (it being about a 20minute cycle from our house) diving out of the car while it was still practically moving I ran on to the loo. Normal nice mammy personality was  recommenced and we had a lovely time.

There were cows, lambs goats and bunnies for the children to pet, some chickens and pigs also. Of course LPV was only interested in going the opposite direction of where you wanted him to go but still it was fun. The playground was in sand so it was nice and safe and we sat and had a picnic whilst LPV held up the queue trying to decide if he actually wanted to go down the slide or not. *dutch children are not the most patient and obviously haven’t heard about taking it in turns*

The best part!!! It’s all free, the one thing I will say about living here is that it’s really catered for families, most suburbs have a petting zoo of some sort, and there is a playground on every 3rd street. 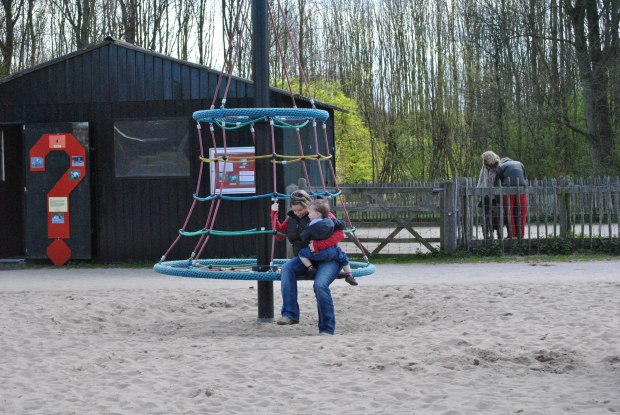 We’ve been shortlisted in the Britmum’s Brilliance in Blogging awards, so if you like reading our blog, why don’t you vote for us to win our category GO, we would be eternally grateful