The lurgy is upon the “house of expat”, it has brought packing, exercising and general merriment to a grinding halt!! LPV is suffering the most bless he’s been unwell since last Saturday, had 2 visits to the Dr and is on yet another fecking course of antibiotics. His sore wee throat has turned his voice husky and he has a tiny little cry of that resembling a kitten stuck in a well. I hate it when he’s ill, I feel completely helpless, he perked up for a few short hours this early evening but is still battling with high temperatures and is objecting strongly to bathing & eating!!

I feel I tend to struggle with him when he’s ill but having sleepless night on top of the lurgy myself, I’ve pretty much been walking round the house like a zombie, the pair of us have snoozed on and off today, just waking for snacks, water and the odd episode of the imagination movers. when I first saw this show I wholeheartedly knew that those 4 guys were going to be virgins for the rest of theirs lives. Now I really don’t know whether it too much beecham’s powders but I’m actually starting to find one of them slightly attractive!! It seriously has to be the Beecham’s…………………………… At least it’s not Mickey John from Me too 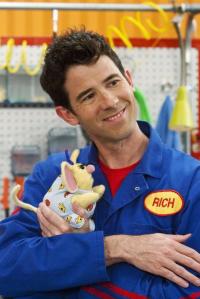 Maybe it's the blue jumpsuit??

2 thoughts on “Not so secret crush!!”