Pregnancy and motherhood , I have to say batters your body in any way it possibly can. This is why I’ve never written off the thought of having plastic surgery, I have ALWAYS wanted a breast reduction ever since the eejits in my english class at school thought it would be hilarious to flick my bra strap. Lets face it if we decide to have anymore children, something would have to be done as there would be a serious case of them sweeping the floor as I go along!!!

However there are some people around that have had surgery who simply make you think………… sweeping bangers??? it would one less housework job to do!!! Take this woman at my gym for instance… firstly I really don’t know on earth she’s at the gym… she walks on the treadmill like she’s strolling around the Chelsea flower show.  A Cougar on the prowl???….more than likely!! Unfortunately her face is more likely to scare off a young pack of iron pumping gazelles, her bussoms are so pert you could rest your dinner plate on them (I could quite possibly be a little jealous of this) and her lips……..oh god her lips, you could unblock a toilet with them. I really don’t want to seem mean but honey look in the mirror!!! 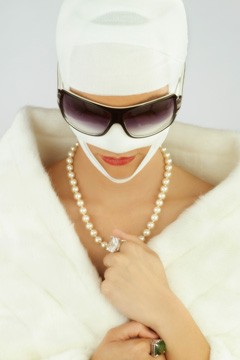